The Glastonbury Zodiac consists of a series of mounds, paths, streams and rivers that come together to form terrestrial representations of the 12 horoscope constellations.  It is  an earthly correspondent to the celestial zodiac that is subject to the stellar influence from its heavenly relations but itself exerting its own influence on the landscape and all that passes through and over it. It has been claimed that it was John Dee, physician and occultist to Queen Elizabeth 1st was the original discoverer of the zodiac but these findings are now deemed to be false. For the rediscovery of the Glastonbury Zodiac we must turn ourselves to the sculptress Katherine Maltwood. 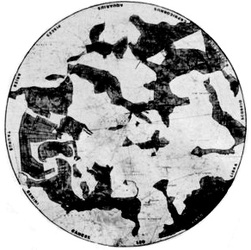 Katherine Emma Maltwood  (1878-1961) rediscovered the Glastonbury Zodiac in 1925.  Maltwood was a gifted sculptor and artist who married John Maltwood, who gave us the famous Oxo cooking stock cube which brought them a large fortune that enables them to travel far and wide and for Katherine to spend her time following up her interests in Arthurian legend, the paranormal, feminism and other subjects that were out of the ordinary for her time. After discovering the zodiac for the first time, a theosophist friend told her that Helena Blavatsky, co founder of the Theosophical Society, had made reference to the landscape zodiac in her opus The Secret Doctrine.  Prior to that, practically nothing was known of the existence of the zodiac.  This kindled Maltwood's interest further and she published her findings anonymously in 1929 in the publication, 'A guide to Glastonbury's Temple of The Stars'.  A later edition of this publication came with aerial photographs of the astrological figures on the ground that came to be known as The Glastonbury Zodiac.

In 1938 she moved to live in Canada where she continued with her work as an artist and also her interest in the Glastonbury star temple.  Although she was not herself a theosophist, she had articles published in the Canadian Theosophist magazine as well as publishing her own pamphlets including one of some of the walks one could take in the midst of the Glastonbury Zodiac.  Katherine Maltwood died in 1961 continuing her art work up until the end of her life. Her house and art collection was given to the people of British Columbia in Canada after her death 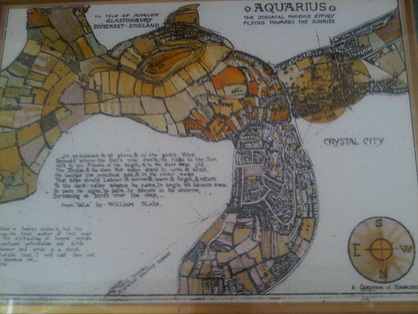 http://www.thealchemicaljourney.co.uk/
The Alchemical Journey is a unique, initiatory adventure in personal transformation, following the wheel of the astrological year through the twelve signs of the zodiac. It runs over a series of twelve weekend workshops, we enter the perspective of each zodiac sign through a range of embodied, experiential processes, which allow us to experience the “medicine” of each zodiacal energy.  We do this through music and movement, guided imagery, sacred mystery theatre and astrodrama.

http://www.megalithomania.co.uk/2010dvds.html
Please consider purchasing Anthony Thornley's DVD presentation of Landscape Zodiacs...
Landscape Zodiacs are representations of the zodiacal signs and symbolism found in the texture and morphology of rural and urban landscape which broadly mirror the zodiac in the constellations of the ecliptic. The most famous of these, Glastonbury Zodiac, was first described by a remarkable artist and mystic, Katherine Maltwood in the 1920s...