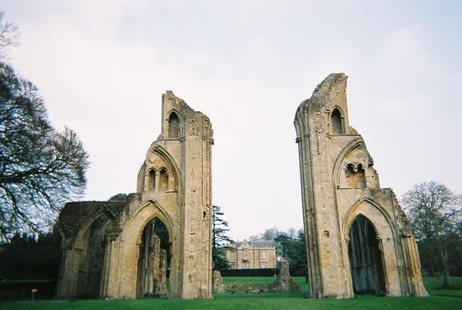 Glastonbury Abbey lies more or less in the centre of things here and in many ways still dominates the small town  apart from the Tor that is, which looks over the town and the abbey and the people. There is a link however between the Tor and the abbey that goes back to antiquity.

As with nearly everything in Glastonbury, the Abbey too does not escape its connection with myth and legend. It is said the christian community here was founded By Joseph of Arimathea when he visited this green and pleasant land in 63AD bringing with him the Holy Grail.
Christian monks are also believed to have lived on the Tor in hermitages cut into the side. The religious significance of the Tor goes back long before Christianity but they too saw value and significance in the hill so much so that they built a chapel on its top, St Michael. This was built on the remains of a 5th century fort and remained until a great earthquake in 1275 destroyed the building. The remains of what we still see standing now are all that is left of the the second church that was rebuilt in the in the 1360s and remained until Henry Viii's  dissolution of the monasteries in 1539

The abbey itself grew and was extended under the patronage of the King of Wessex in the 8th century. The following century however saw Danish raiders help themselves to some extensive plundering into the Saxon Kingdoms and many monasteries, including Glastonbury were destroyed in this time. The monastic tradition was revitalised however and the abbey was rebuilt and flourished under St Dunston in the 10th century before coming into the hands of the Normans in the 11th century.
King Arthur's Grave? More trauma for the abbey came in the 12 century when the monastery was destroyed by fire and rebuilt again. In 1291 came the startling discovery in the abbey grounds of the tombs of King Arthur and Guinevere which can be seen indicated in the photograph below. This may have been a ploy to draw in visitors and pilgrims however and it is doubtful if this really is the final resting place of the legendary and mythical king.

By the 15th century Glastonbury Abbey was the wealthiest Monastery in Britain apart from Westminster. However with the dissolution of the monasteries in the 1500s the church lost all its wealth to the crown and the final abbot of the Abbey, Stephen Whitting was hanged in St Micheal's on the Tor for resisting Henry the VIII and that was the end of him and Glastonbury Abbey as a functioning church and Monastery. Its remains are all that are left but they make for a very interesting and informative  visit and I would highly recommend taking a tour of the abbey as part of your stay in Glastonbury.